Switch to the dark mode that's kinder on your eyes at night time.

Switch to the light mode that's kinder on your eyes at day time.

Switch to the dark mode that's kinder on your eyes at night time.

Switch to the light mode that's kinder on your eyes at day time.

Social media has increased the prospects of effective communication among people at large; closing up the boundaries between people and making easy interactivity possible.

Sister Deborah, in a twitter chat with Social Media Week Accra, addressed celebrity issues being faced online due to over-familiarity between them and their fans.

The notion that celebrities ought to act a particular kind of way often creates the impression that they may be a different kind of people, and thus, they should be able to contain everything that comes at them calmly.

Some of these cyber bullies are fans of the celebrities who have a sense of entitlement about how the stars should interact with them. Sister Deborah is not new to the activities of the cyber bullies.

In the twitter chat, she opened up about a lot of things she thought about cyber bullies; she described them as “unhappy people using electronic means to try and bring others down“. She believes giving these people an audience is what fuels their activities.

Hence to deal with them, she stated: “I always remind myself that we all come from different backgrounds or even similar, but not everyone has been able to start to really think and make critical decisions for themselves by themselves.“

She also shared instances where she was cyberbullied. She lamented that in the comment section under a recent post of a video she made of herself singing her song “Ghana Jollof” on Instagram, some posted some mean and hateful things, and she had screenshots to show; like they say, the Internet always has receipts. 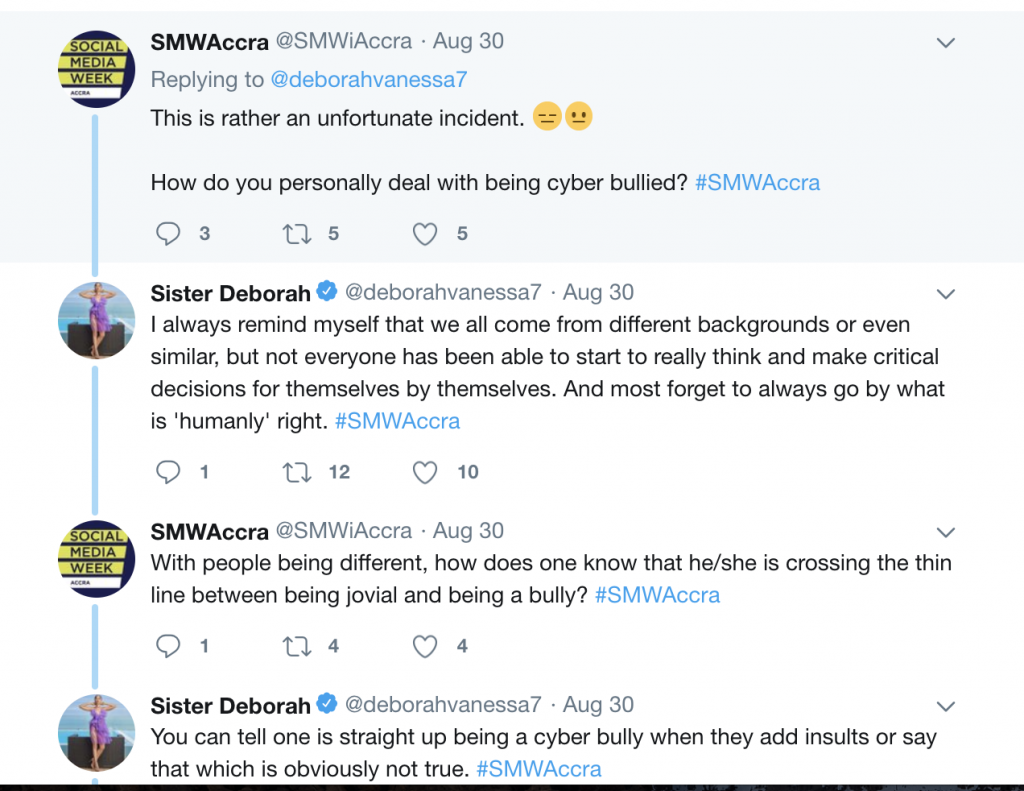 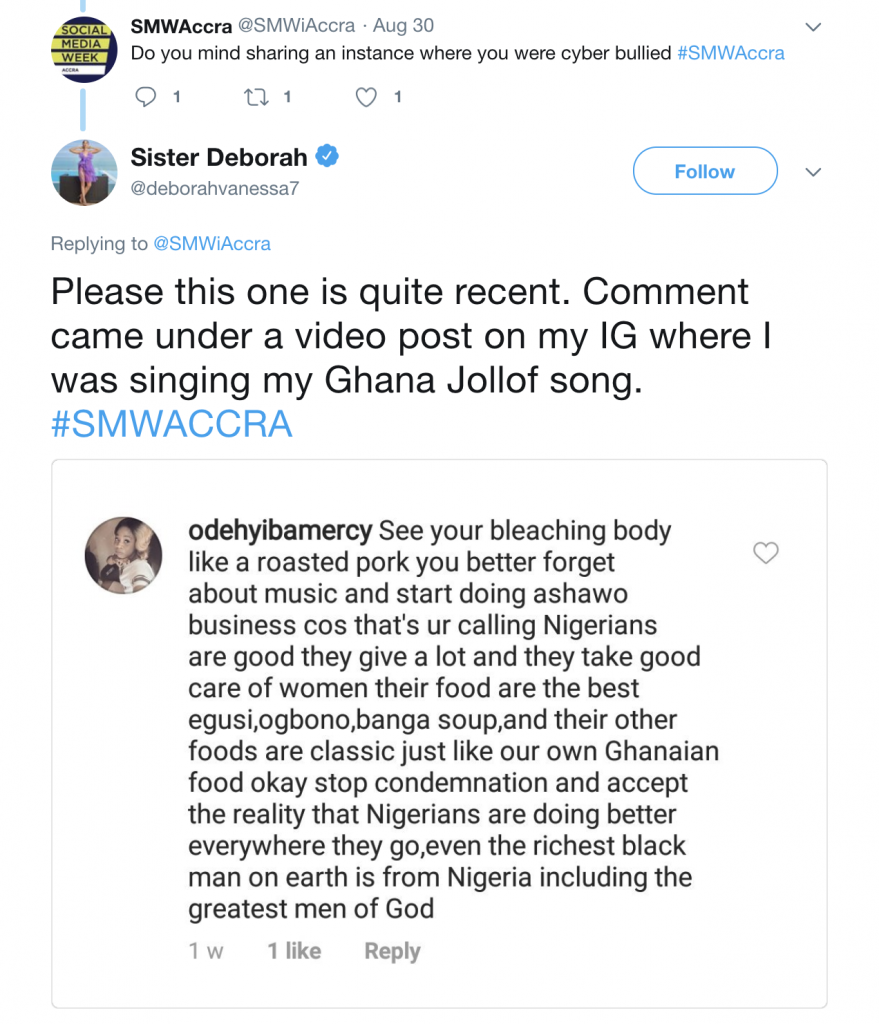 She explained that people should know their limits and know when to draw the line when dealing with celebrities and people in general.

On the kind of relationship, fans should have with their celebrities; they shouldn’t feel too entitled to the point of harassing these celebrities – for they are as human as everyone else, and words do affect them like everyone else too. 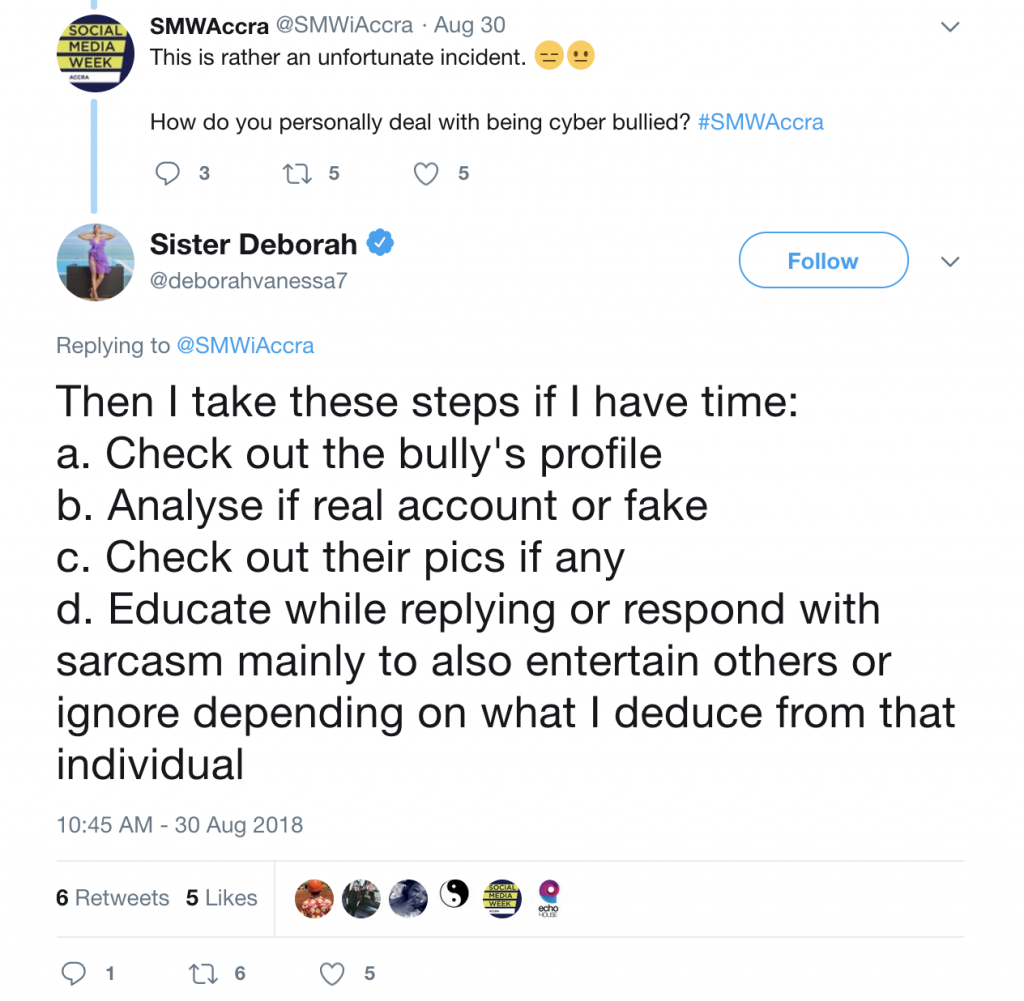 Sister Deborah gave out a 101 hack to identify cyberbullies,  she said, “You can tell one is straight up being a cyber bully when they add insults or say that which is obviously not true”.

Sister Deborah, John Dumelo and a host of other celebrities will speak extensively on this topic and share their experiences on the 10th of Sept. 2018 when SMW Accra kicks off.

Get the best viral stories straight into your inbox!

Bringing the news to you!

Back to Top
Close

To keep our content always available to you without any subscription, we rely solely on advertising to fund this website and we use Targeting Advertising Cookies to serve adverts to you. To help us to continue to keep our content available to you at no charge, we suggest that you disable your Ad Blocker or use different browser. Visit our Privacy Policy to learn more about our data collection, usage and storage.

How to disable? Refresh